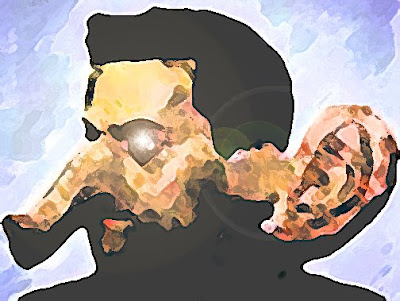 The three-day conference in Des Moines was was supposed to be a festive occasion for a group of international students who were living in or visiting Iowa.

Sixteen at the time, I was invited to tag along because we had an international college student living with us and she didn't want to travel alone to Des Moines, which was three hours away by bus.

Instead of staying in a hotel, we stayed with a host family, the Smiths (not their real names). These people graciously opened their home to us and gave up their own bedroom so that we would have a nice place to stay. They were a young family with three children, one of them a newborn, so having two extra people around must not have been easy for them.

The husband looked very boyish, almost like a teenager, while the wife looked considerably older.

Without thinking, I made an assumption based on a stereotype.

I said to Mr. Smith, "Your mother is very nice."

Even as the words slid out of my mouth, I realized the awful truth. Fortunately, Mr. Smith was gracious and did not take take my gaffe personally; maybe he was used to it, but, still...I spent the entire weekend slinking around like a felon.

One positive: I hadn't told Mrs. Smith that she had a cute son.

Sigh...as a youngster, I was known for my inadvertent lapses in etiquette, notorious for opening my mouth before thinking, but, at 16, I was old enough to know better.

I have also been on the other side of the erroneous assumption. Just before my husband and I married, we were shopping for our wedding rings. I was a very young-looking 33-year-old woman (I often got carded in bars), and my husband a normal-looking 43. One particularly thick sales person said, "Your daughter is a very lucky girl."

Hello! We were shopping for wedding rings! The young salesperson was horribly embarrassed and apologized profusely, but my husband-to-be was slightly offended at her assumption and spent the day feeling as though he had robbed the cradle.

Young children can get away with those minor embarrassing moments, but once you shed the short pants and pigtails, it's time to think about your words before they slip out.

Basic rule of thumb: if you're not sure, don't make assumptions. It's better not to make a statement or ask a question than to risk making an erroneous assumption.

On the surface, asking, "When's the baby due?" sounds like an innocuous enough question, but if the listener is not pregnant, well, you have just embarrassed both yourself and the non-pregnant woman.

Have you noticed that most assumption-based questions and statements are simply nosy and not really any of your business anyway?

The pregnancy question is especially egregious; even if the woman is pregnant, maybe she simply doesn't want to make a big deal about her condition. So button your lip; if she's someone with whom you have regular contact, you'll find out soon enough--when the baby arrives. If you don't expect to see her any time soon, why would you care if she's pregnant or not?

Some commonly-held assumptions/stereotypes and their opposites:

--African-Americans work at low-paying service jobs (Perhaps with the election of Barack Obama, this silly assumption will fade away into welcome obscurity).
Many African-Americans hold positions of immense power.

The trouble is, these common assumptions and stereotypes are often true, so in our minds, they are in danger of seeming to be true all the time; however, the truth may be more complicated.

This list is not exhaustive--every day, we make assumptions--both true and erroneous--about the world around us.

However, we can minimize any damage caused by assumptions, by simply keeping our lips buttoned.

When you are considering asking a stranger or acquaintance a personal question, first ask yourself:

--Is the question appropriate to the level of relationship you have with this person?

--Will your knowing the answer help this person in a significant way?

If you answer "no" to any of these questions, then don't ask your question.

Unsolicited comments based on assumptions follow the same basic concept:

--Is the comment appropriate to the level of relationship you have with this person?

--Does the listener really need to hear what you have to say?

--Will your comment help this person in a significant way?

If you answer "no" to any of these questions, then don't offer your comment.