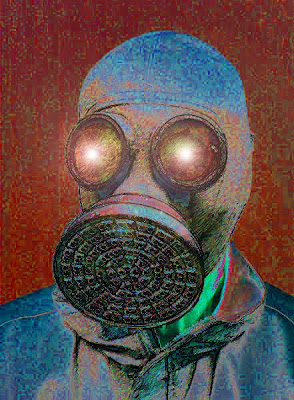 So when Aunt Savvy was about ten years old, her grandmother pointed directly at her and announced (in front of a roomful of company):

"You STINK!"
Alas, it was true. It was mid-July in the sultry Midwest, and young Aunt Savvy stunk to high heaven. Being at an age when a dab of deodorant would have done wonders in keeping the living room aroma-free, Aunt Savvy had decided she did NOT need such grown-up foolishness.

The terse announcement was a room stopper, as all eyes drilled on the girl with the sopping half circles under her arms.

That public humiliation was enough to send this youngster running for the Secret roll-on. From that day onward, Aunt Savvy never failed to add those daily dabs to the pits.

Fast forward to present day: recently, Aunt Savvy was shopping in Big Box Store, going about her business when, suddenly, she caught a whiff of something distinctly unpleasant.

She looked around: no one but her and her significant other for at least three aisles. Aunt Savvy was pretty sure they had both showered that day...

Besides, the odor was more than just a little sweat; it was the aroma of, well, bodily fluids and solids, mixed with unwashed body and sweat.

The smell was beginning to permeate throughout the store.

As Aunt Savvy left the store, she discovered the source of the odor: a woman with greasy, stringy hair and dirty clothes. By this time, the odor was so bad that Aunt Savvy was tempted to pinch her nose; this was the smell of the great unwashed, years and years of avoiding soap and water. This wasn't a case of working out or working out in the fields and not being able to shower before hitting the store to buy a computer.

No. This smell was pungent and skunk-like, deeply ingrained, a part of the woman's every fiber, and it left an awful trail, straight to Aunt Savvy's nose.

The woman's family was with her and did not seem to notice a thing (???). Meanwhile, Aunt Savvy was gagging. She wanted to tap the woman on the shoulder and say,

"You STINK!"
Of course, etiquette demands that one does not call out unpleasant facts to strangers.

So Aunt Savvy will offer her some unsolicited advice here:

Take regular showers or baths and use plenty of soap and water. Scrub. It doesn't haven't to be daily ritual, but part of a regular routine--at least every other day. Not only will you feel better, but so will everyone around you; your loved ones deserve that from you. Heck, the PUBLIC deserves NOT having to smell you three aisles away.

We live in a culture where certain bodily odors are offensive; you can get away with a little sweat or the smell of automotive grease. People understand that working people cannot always get home to shower before hitting the store--they understand that those are the smells of honest and hard labor.

But you, anonymous lady, are simply stinky and offensive. You smell of pee and poo and layered grime and grit--there is no use sugarcoating it.

Aunt Savvy does not wish to be cruel; she genuinely feels sorry for you and understands that you do not intentionally mean to assault her nose, but you have failed miserably in the art of social graces when you refuse to wash your body properly.

To the lady's family: it is clear that your loved one needs some kind of psychological counseling; the woman's lack of cleanliness suggests a deep-rooted problem of some kind, way beyond your and Aunt Savvy's milieu. In our culture, it is not acceptable to present, in public, one's self in such a distasteful state. An intervention of some kind would be in order.

We are way past the era when homemade lye soap and the Saturday night bath (whether you need it or not) are all you need to navigate polite (and even impolite) company.

Loved ones: please help her. She sorely needs it.

Please help the public.
*
Posted by Jennifer at 9:47 PM