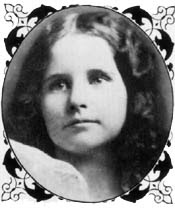 DEAR EDITOR: I am 8 years old.

Some of my little friends say there is no Santa Claus.

Please tell me the truth; is there a Santa Claus? 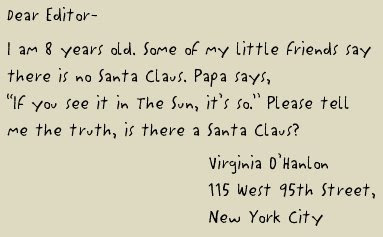 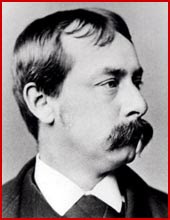 VIRGINIA, your little friends are wrong. They have been affected by the skepticism of a skeptical age. They do not believe except [what] they see. They think that nothing can be which is not comprehensible by their little minds. All minds, Virginia, whether they be men's or children's, are little. In this great universe of ours man is a mere insect, an ant, in his intellect, as compared with the boundless world about him, as measured by the intelligence capable of grasping the whole of truth and knowledge.

Yes, VIRGINIA, there is a Santa Claus. He exists as certainly as love and generosity and devotion exist, and you know that they abound and give to your life its highest beauty and joy. Alas! how dreary would be the world if there were no Santa Claus. It would be as dreary as if there were no VIRGINIAS. There would be no childlike faith then, no poetry, no romance to make tolerable this existence. We should have no enjoyment, except in sense and sight. The eternal light with which childhood fills the world would be extinguished.

Not believe in Santa Claus! You might as well not believe in fairies! You might get your papa to hire men to watch in all the chimneys on Christmas Eve to catch Santa Claus, but even if they did not see Santa Claus coming down, what would that prove? Nobody sees Santa Claus, but that is no sign that there is no Santa Claus. The most real things in the world are those that neither children nor men can see. Did you ever see fairies dancing on the lawn? Of course not, but that's no proof that they are not there. Nobody can conceive or imagine all the wonders there are unseen and unseeable in the world.

You may tear apart the baby's rattle and see what makes the noise inside, but there is a veil covering the unseen world which not the strongest man, nor even the united strength of all the strongest men that ever lived, could tear apart. Only faith, fancy, poetry, love, romance, can push aside that curtain and view and picture the supernal beauty and glory beyond. Is it all real? Ah, VIRGINIA, in all this world there is nothing else real and abiding.

Hymns and Carols of Christmas

Yes, Virginia, There is (Still) a Santa Claus
Aunt Savvy reaches back to 1897 and updates, 111 years later, Mr. Church's response to the eight-year-old Virginia:

Your little friends are still wrong, and what the sage Mr. Church so poignantly wrote to you about skepticism also applies in the new millennium.

You would not recognize much of 2008 America.

The world has become a much different place since you were a little girl 111 years ago. We have had several wars, awesome inventions, technological advances, a major depression, several presidents (some great, others not so great), great wealth and heartbreaking poverty, and increasing pollution.

We have had assassinations of great people and unthinkable national disasters. Your beloved newspaper is gone, along with other noted newspapers. The internet is slowing taking over the print medium, so, in 2008, your charming letter would probably be composed on a keyboard and edited on a computer screen, similar to a TV, which you have not experienced, either.

Families have changed with more divorces and co-habitations, a word that probably did not exist in your day. While these may not offer the ideal family structure you have enjoyed, families are managing as best they can. Once positive aspect: young women are no longer shunned or punished if they make a mistake (You'll understand what this means when you grow up).

If you are African-American (and judging by your last name, you are not), you would be especially jubilant at this juncture in history, for as we look forward to our new President's inauguration on January 20, 2009, we now realize that the impossible is no longer impossible. In fact, no matter what your race or ethnic group, our President-elect represents a positive new era in race relations and evolving social constructs.

Yes, Virginia, the year 2008 has been difficult, with rising gas prices, an economic meltdown, lost jobs, and a contentious election season.

Aunt Savvy knows for a fact that Santa still exists and will continue to exist. We now have the tools to verify Santa's travels around the world. In your day, you had to accept Santa's existence on the word of your parents and editors, but now we have NORAD, YouTube, and Google Maps to track the portly man in the red suit as he flies around the world, delivering presents and good wishes to children like you. Still, you should continue believing your parents or guardians when they tell you that Santa is alive and well.

Wise people understand that while Santa is a jolly old fellow, Christmas is so much more than piles of expensive presents under the tree, even in our consumerist culture. Christmas is a time when Christians gather together to celebrate the birth of a child over 2,000 years ago. Christmas is also a time when families get together and celebrate their love for each other. As you can see, these important things have not changed since 1897.

Virginia, you may not realize this, but not everybody celebrates Christmas. Our culture has become sensitive to those who celebrate their God in their own way, although Christmas still seems to overwhelm those people who would rather not hear about the festivities on TV and see all the decorations. As a sign of respect, we have learned to say "Happy Holidays" or "Season's Greetings" to people we do not know well, for just about everyone celebrates the New Year.

Christmas, as a Christian holiday, has largely been curtailed as a government-sanctioned holiday. While this may seem shocking and unthinkable to you and your family, you must remember that this country was founded on the tenets that its citizens would enjoy freedom of religion, which also means freedom from a state-sanctioned religion. Good news: those who wish to celebrate their religious holidays still enjoy the freedom to do so; in fact, young people like you practice your religion and holidays, but they also often study about other religious holidays--for example, Muslim, Jewish, Christian, and, yes, pagan holidays.

Virginia, of course there is a Santa; in every religion he exists in some form. He may bear another name and celebrate a different holiday at a different time of year, but as long as we have families and friends to celebrate, Santa will always be in our hearts and minds.

Besides, if he were not so we would have to invent him.

The 2008 version of "Yes, Virginia, There is (Still) a Santa Claus," is copyright Aunt Savvy (Jennifer Semple Siegel), 2008, and may not be posted or printed without permission from the author.
*
Posted by Jennifer at 2:16 PM